Israel, I’ll be blunt, NYC dykes are just not that into you.

I’ve been on a bit of a dating whirlwind these last months, which basically means I’ve had an inordinate number of rendezvous in cafés and wine bars with women I met in cyber or real space. Obviously, this is a self-selecting group of women who are generally progressive and, presumably, find me easy enough on the eyes to want to sit across a table from me and talk over a libation.

So yes, this is entirely anecdotal and unscientific. Nonetheless, having been active since I am a teen in Palestine solidarity organizing, I am accustomed to Palestine being at the very least contentious and at most a relationship third rail among the left-of-center women I’ve dated over the years. No longer.

Though I’m Jewish myself, until lately I hadn’t dated a Jewish woman since my socialist girlfriend in college in the mid-80s—who through some accident of history actually lives up the block from me now (with her husband and kids). Go figure.

Since like everyone else I’m rather busy, I’ve adopted a full disclosure policy when it comes to dating women whom I know ahead of time are Jewish. I let them know of my pro-Palestine sympathies making it clear that if this is an issue for them we shouldn’t bother meeting up since we’d despise each other.

Of the nearly two dozen Jewish women with whom I’ve corresponded for dates, only one took offense. Every single other Jewish dyke either said she found Israel’s actions racist and confusing and was curious to know more or said she totally agreed and found herself siding with Palestinians more and more. Of the non-Jewish women, the curiosity for them was why any queer would ever support the oppression of Palestinians.

This conforms very much to the shifting winds of social consciousness in the US around the question of Israel’s brutal occupation of Palestine. Even the US-based Israel Project poll noted that in 2009, after the first massacre of Gaza and imposition of the siege, support for Israel among US voters plummeted from 69 to 49 percent. Their pollster Stanley Greenberg concluded, “The section of the American public where Israel is most rapidly losing support is among liberal Americans who align themselves with the Democratic Party.” Zogby and other polls since confirm this trajectory.

Next week, the Center for Gay and Lesbian Studies at CUNY is hosting a conference on Homonationalism and Pinkwashing that is largely the brainchild of Jewish lesbian novelist and Palestine solidarity activist Sarah Schulman. The conference has been sold out for months, not at all common for academic conferences, and certainly not ones exploring sexuality through the lens of imperialism, racism and internationalism, with several talks on the question of Israel/Palestine. It is a radical departure from the navel-gazing that too often consumes queer political discourse, in my opinion.

It seems that in addition to the easy accessibility of alternative news analysis on Israel/Palestine via the Internet, the efforts of the rising boycott, divestment and sanctions (BDS) movement are having a transformative impact, rendering Palestine solidarity mainstream. Disgust with Israel and US policies that are complicit in its crimes are on the rise and it’s beginning to reverberate throughout US society.

It’s even reached the dykes on OK Cupid.

Catch my talk Wednesday, April 3, at Pratt on sexual liberation : 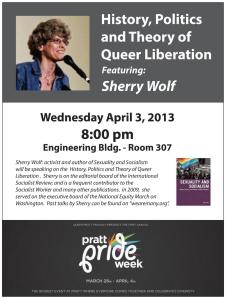 This entry was posted in Uncategorized and tagged BDS, homonationalism, pinkwashing, Sarah Schulman. Bookmark the permalink.

One response to “NYC Dykes to Israel: Meh”